It was an interesting season for Sophomore Abbie Rooker this year in girls’ basketball. After moving into a substantial varsity role as a freshman under former coach Sarah Parker, Abbie had to adjust to a new system and a new coach when Kyle Mealy arrived this past fall. The adjustment was not an easy one, as Rooker began the season coming off the bench while Senior Mariah Spain begin the season in the post. As the season progressed, Abbie made great strides in practice with the new offensive and defensive system implemented by Coach Mealy, and those improvements also raised her minutes on the court during games.

“As the season began, Abbie was still trying to adjust to what we wanted her role to be. She also had to adjust to the new system, both on the offensive end and the defensive end,” said Mealy. “After she had a few games under her belt, you could see a dramatic improvement in her game on both ends of the floor.”

That dramatic improvement was needed midway through the season when Spain left the team for personal reasons, and Rooker assumed the responsibility in the post for the Lady Warriors. Once placed into the starting lineup, Rooker never looked back.

“Through January and February, Abbie became our number one option inside,” Mealy said. “She became a leader for us with her play, and she gained a great deal of respect from the upperclassmen in the process.”

By season’s end, Rookers’ accomplishments had taken notice in the Mid Eastern Conference, as well as, Delaware County. As a sophomore, she was named to the all conference team and received an honorable mention nod from the Delaware County Athletic Association.

Coach Mealy was extremely proud of Rookers’ accomplishments, but he was quick to point out that she will again have to prove herself on the court during her upcoming junior season. ” We are very proud of Abbie on her sophomore season,” Mealy said. “But now opponents will key on her so she will have to work that much harder to be ready for her junior year.” 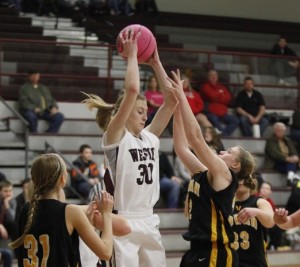