It was a long weekend for the Wes-Del Football team, but eventually it was well worth the wait.  The Warriors began their battle with N. Decatur on Friday night, but the game was postponed with 10:39 left in the 3rd quarter due to lightning in the area.  The Warriors led 7-6 when play was suspended.  The only Wes-Del score was on a TD touchdown strike from Matt Emrick to Bryce Marsh.  Jacob Newsome was successful on his extra point attempt.  The game was picked up on Saturday at 2:30.  The Warrior defense came out with a lot of intensity and held N.Decatur scoreless.  They also helped the offense out by scoring on a safety.  The lone Warrior TD on Saturday came on a Matt Emrick rushing touchdown.  Congratulations to Coach Hess and his team on a hard fought victory. 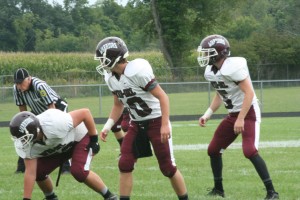