The Warrior Basketball Teams played their annual double header vs the Broncos of Daleville this past Saturday night. This was also National Guard Night at Wes-Del.  The players on each team wore special uniforms provided by the National Guard.  They also, along with the Warrior Cheerleading Squad presented the colors by holding a volleyball court sized flag during the National Anthem.  This was a very fun evening and Warrior Nation appreciates the National Guard for all of their hard work and service.

The Lady Warriors lost a hard fought battle to the Broncos by a score of 52-30.  They continue to battle and improve each game.  Their next game will be at home on January 3rd vs Indiana Math and Science.  Come out and cheer these girls onto a victory.

The boys team defeated the Broncos in a nail biter.  After trailing by 12 points in the fourth quarter, the Warriors used some great defense and clutch shooting to pull out the victory.  Samson Waters made a 15 foot jumper with 3.7 seconds to give the Warriors a 44-43 lead.  After the Broncos missed a near half court shot, the Warriors held on to win.  The Warriors play next at Frankton on Dec. 27. 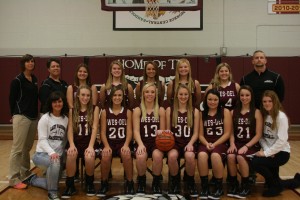 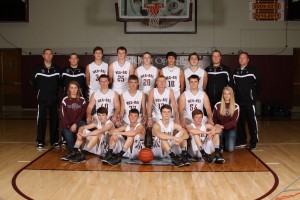